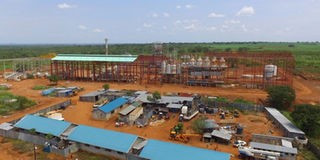 Atiak Sugar Factory has decided to suspend all of its operations following months of grappling with a drastically diminished supply of Sugar cane to its factory that was a result of a vast number of fires to their sugar plantations. The company chief executive Ms. Amina Hersi Moghe informed the media that without adequate sugar cane supply, the factory couldn’t operate leading them to take the decision to suspend operations until the factory is able to harvest sugar cane. She mentioned that fires that occurred in December 2021 were responsible for destroying a large amount of sugar cane that had been planted to supply the factory. She however, also mentioned that the factory is projected to resume operation in August 2022 once the sugar cane in the Ayuu Alali plantations in Lamwo district was ready for harvesting. This would not be the first time that Atiak sugar plantations are going up in a blaze, it is reported that these fires have been occurring since 2016 with many of them taking place on sugar plantations that were on the verge of being harvested, with numerous hints at foul play or sabotage. It is claimed that the sugar factory currently has several aggrieved parties that it’s at loggerheads with, however the most prominent are the sugar cane out-growers that have had disagreements with the sugar factory based on none payment. The Atiak Sugar Factory that sits on over 15,000 acres has over the last 7 years tasted the bitterness of sugar production as a result of numerous inexplainable fires; 2016 saw the first plantation fire that swept over 150 acres of land and cost the company over 150,000,000UShs, December 2018 saw another fire that burnt 250 acres, while the largest plantation fire was recorded in February 2019 that saw 600 acres of sugarcane plantation burnt that cost the company over 3,000,000,000UShs, a fire on a similar scale also engulfed 600 acres in December 2021 with the latest fire occurring in January 2022. It however, should not be forgotten that the establishment of the Atiak Sugar factory was not without controversy, the factory was established amid rejection from the people of Amuru district, it has also been faulted for exceeding their land boundaries in opening farmlands for out-growers, thus interfering with communally owned land and in 2018, 30 individuals petitioned the LC 5 chairperson over land encroachment, such scenarios have greatly affected the investor-community relations. The disagreements with out-growers who are also members of the local community further exacerbated the factory and its operations. With limited acceptance from the local community and out-growers, it is no wonder the factory is continuously plagued with disruptions to its operations. It is clear that the factory grossly overlooked the importance of working together with the local community to ensure smooth running of their project and despite this being a government backed sugar factory, community buy-in and acceptance, should have been at the forefront of their sustainability agenda. Therefore, once the factory restarts its operations, it is crucial that the local community, out-growers, the management of the factory and government forge a path for mutual co-existence since this will sway the community to limit retaliation and allow it harvest its sugar cane on time, an action that ultimately will allow the factory to pay its out-growers.

The Bitter taste of Sugar as Atiak Sugar Factory Suspends Operations.
Over 3500 individuals and families evicted from Kiryandongo District by 3 multinational companies.
Land Probe Commission recommends that all Land needs to be Registered.